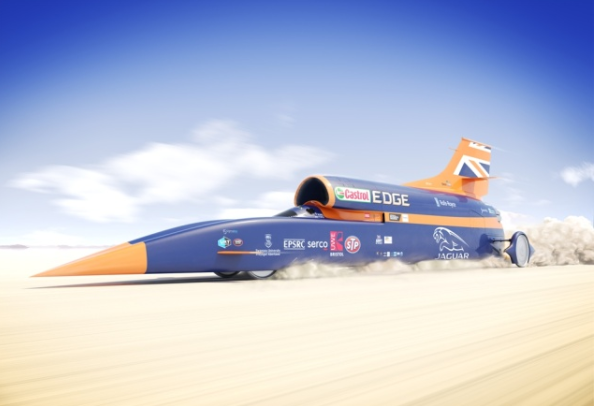 The BLOODHOUND Project centres on BLOODHOUND SSC, a supersonic car that is designed not only to go faster than the speed of sound (supersonic) but to over 1,000mph (1,600km/h). It will cover a mile in just 3.6 seconds.

BLOODHOUND SSC is approximately 13.4m long and weighs 7.5 tonnes. The design is a mix of car and aircraft technology, with the front section being a carbon fibre monocoque (like a racing car) and the back portion being a metallic framework and panels (like an aircraft). The two front wheels sit within the body and two rear wheels are mounted externally within wheel fairings.

The Car will be powered by both a jet engine and a rocket, which together will produce more than 135,000 horsepower: that’s more than six times the power of all the Formula 1 cars on a starting grid put together.

Over 110 man years of effort have been invested in the design, build and manufacture of BLOODHOUND SSC.